Our methods to test your app 👨‍🔬

As we say on our website: “A non-tested feature is a bugged feature”. AMEN! 🙏

At Nightborn we’re all about quality! That’s why testing is a crucial & integral part of our process. We always ensure that your app is performant! Meaning the code is optimized, the application loads fast & is stable with high-volume traffic. We make sure that every elaborated flow is working correctly.

👉 Testing is the process of running tests against your application to ensure that it's functional, performant & ready to launch. 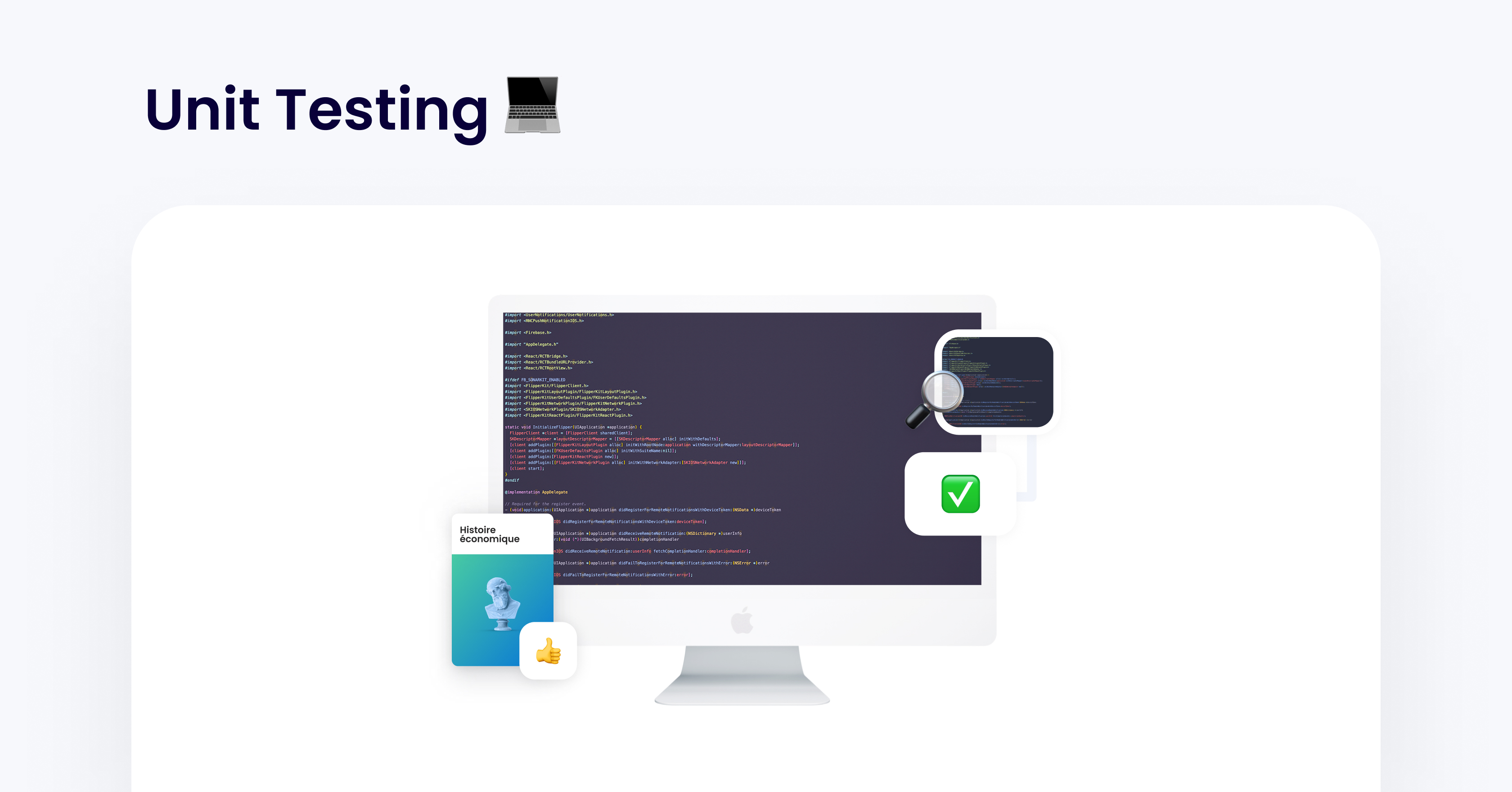 Unit testing is done during the development process & is our first level of testing.

A crucial step, because the earlier a problem is identified, the fewer compound errors occur! If done correctly, it helps detect early code flaws which may be more difficult to find in later testing stages.

🚨 YES, this is super important! Because the costs of fixing a problem early can quickly outweigh the cost of fixing it later! 🤑

It encourages developers to modify the source code without immediate concerns about how such changes might affect the functioning of other components or the program as a whole.

The main objective of unit testing is to separate & test our own written code to make sure everything runs smoothly. It's a process in which the smallest testable components of an application are individually & independently examined to ensure appropriate functionality.

👉 Manual method: create an instinctual document detailing each step in the process

👉 Automated unit testing uses a testing framework to develop test cases. These frameworks are also set to identify & report any failed test cases while summarizing them.

💡 Our devs will first write the code, next they'll make the unit test & refactor the application until the test passes. They use a testing framework to report any failed tests, usually resulting in an explicit & predictable code base. Each test case is tested independently in an isolated environment, as to ensure a lack of dependencies in the code.

You should not make a test for every line of code, as this may take up too much time. 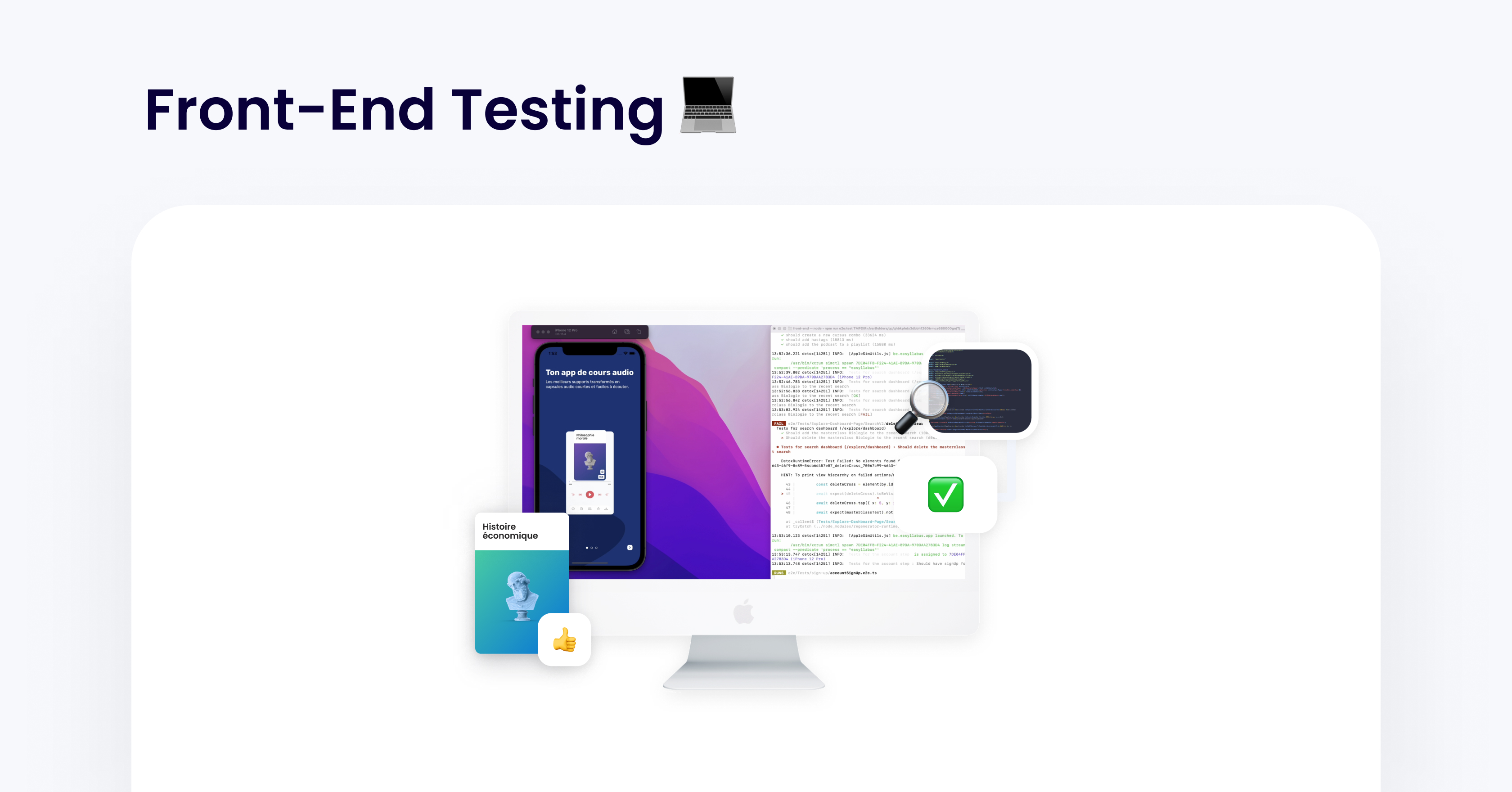 At Nightborn, we automate the testing of all flows & scenarios to make sure all operations & actions are achieved correctly in the application. Allowing our devs to quickly fix problematic flows, detect client-side performance issues & evaluate the product from a user point of view. Through front-end tests, our developers are sure they don't jeopardize critical workflows in the application.

What is the added value of front-end testing? 🧐

👉 Factors like usability, navigation & page load speed are crucial for both users & ranking algorithms on the search engine. Your lead or revenue-generating channels may suffer from a poor-performing UI, especially if important workflows are disrupted. Think of an e-commerce platform where key workflows such as check-out or adding items to a cart are not functioning properly. 🛒

The idea here is that a subtle error on the front-end of your application can cause irreversible damage. Turning a blind eye to aspects that may ruin performance is expensive. You need to notice flaws in your systems before end users do, and this is where front-end testing comes into play.

👉 It's indispensable for anyone looking to seamlessly integrate third-party services into a web application. Because when you integrate other services into your application, a poorly performing script can lead to compromise. Which can cause substantial damage to the user experience (UX). This means that front-end testing becomes essential since practically every modern app relies on third-party integrations, especially now that software-as-a-service (SaaS) platforms are becoming increasingly popular.

👉 It plays a vital role when it comes to determining how web applications behave across a range of operating systems, browsers & devices.

This is especially important since advancements in client-side development coupled with modifications in browser technologies can lead to compatibility issues. Therefore, front-end testing is necessary to ensure a website or app renders the same across different devices, system architectures & browser engines. 📱💻

Front-end testing helps our dev team to give users a higher quality User Interaction & Experience (UI/UX) by optimizing these performance benchmarks. More specifically, it enables users to reduce the application loading time, ensure the app's content is displayed correctly, and give the interface a unified look across different devices & browsers. 🙌 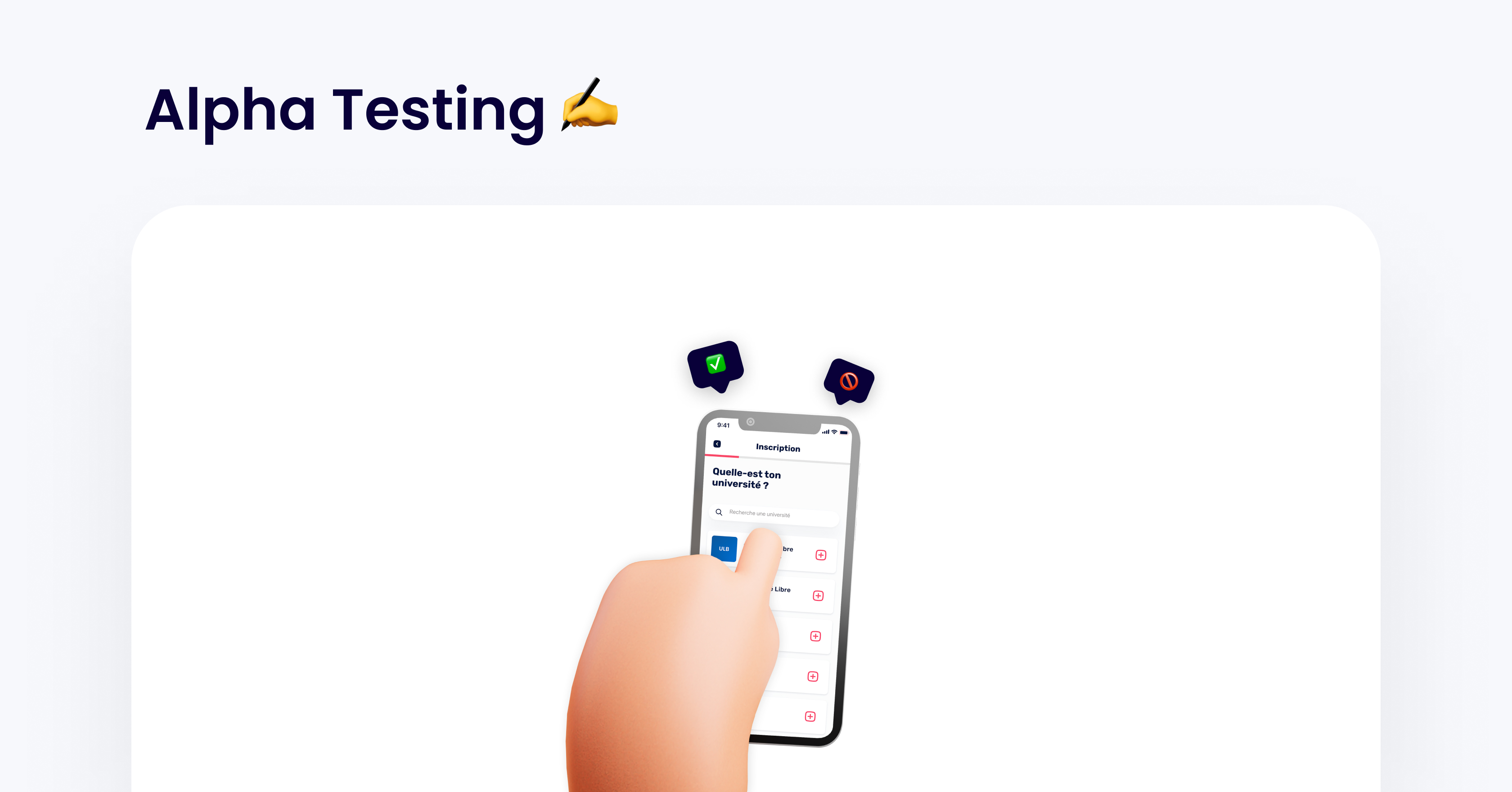 Is done in collaboration with the client's team on real devices. The goal of Alpha testing is to thoroughly test the application to catch as many issues & other major bugs as soon as possible before the product has any public exposure or usage.

The objective is to have as many eyes on the product as possible. To guarantee that all use cases are covered & to speed up the process, the various tasks & test cases are often divided among the different testers. The testers will then report problems to the bug-tracking platform or to the development leads directly.

It's the first end-to-end testing of the product to ensure it functions correctly, meets the business requirements & does everything it’s supposed to do. 💪

End-to-end testing is a technique that defines the product’s system dependencies & guarantees that all integrated components function as intended.

The primary goal of End-to-end (E2E) testing is to simulate the end user's experience while validating the system under test and all of its components for data integration & integrity. Software systems nowadays are complex and interconnected with numerous subsystems. If any of the subsystems fails, the whole software system could crash. This is a major risk & can be avoided by end-to-end testing.

💡 When alpha testing, don't forget to use these tactics:

👉 Review the functional specs & test cases before getting started. This provides context & a focus area as well as establishes a baseline common understanding.

👉 Before leaving the alpha testing, make sure that there is consensus. The product should be approved for beta testing by all parties & a forum should be provided for everyone to voice their concerns before the choice is made.

👉 Test the entire user experience (UX). A product may “work” but not be usable as part of a larger workflow, so test cases should include the end-to-end experience of a real-world user.

Although it's sometimes skipped in favor of going directly to beta testing, alpha testing is a crucial step in the product release process. Internal reviews can reveal a variety of issues that could derail a beta test & always result in a higher-quality product being released to the market.

Although conducting a thorough & in-depth evaluation by staff could appear resource-intensive, nothing can replace the experience of a few extra sets of eyeballs reviewing a product’s functionality. Alpha testing is a worthwhile investment of company resources & should be routine for any major release. 👀 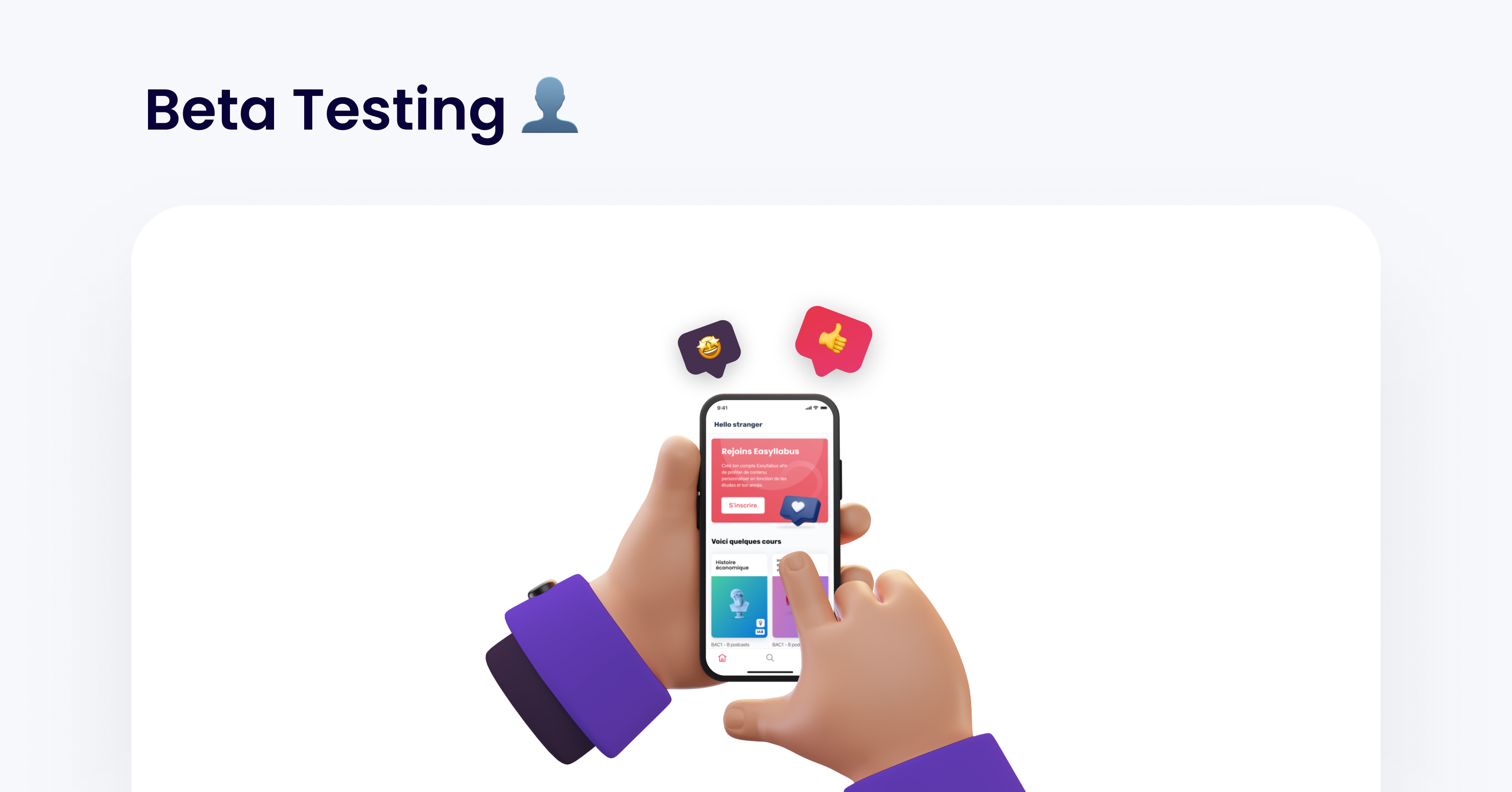 The main difference between Alpha & Beta testing is who's doing the testing. Whereas Alpha tests are typically performed by internal employees in a lab or stage environment, Beta tests are done by actual users in a production setting.

It's a type of testing where we provide a nearly finished product to a group of target users to evaluate the product's performance in the real world, completing real-world scenarios while interacting with the app & in a real environment. Meaning we get in touch with potential end-users & ask them to test the application, after which we collect their feedback & reviews.

🚨 Note: it's important that the test participants belong to the product’s target audience.

Beta testing a full-featured & stable product is the perfect opportunity for real users to use a product to uncover any bugs or issues before a general release to a wide audience. It's the final round of testing. This also means it’s the first chance for full security & reliability testing because those tests can’t be conducted in a lab or stage environment.

Beta tests can either be open or closed.

👉 In an open test, anyone can use the product. Testers are usually informed that the product is in beta testing & given a method for submitting feedback.

👉 In closed beta, the testing is limited to a specific set of testers. Closed Beta testers can be made up of current customers, early adopters, and/or paid beta testers. Getting some early-adopting influencers into the "exclusive" beta testing pool can build some buzz & anticipation for the general release. 🤳

The Beta test aims to make sure that real users can test the product’s scalability, performance & reliability under real-world usage scenarios. It ensures the software can perform under real workloads and that speed & storage all work as expected. It's an opportunity to start examining user behavior & analytics to make sure users interact with the product as expected or find unexpected usage patterns.

It's also a chance to refine the positioning, marketing & communication about the product.

💡 Gathering Beta test learnings before a general release can inform priorities about user education, onboarding, user help & documentation to make it a smoother experience for the general user base.

Testing can last for a specified period of time or run until new issues stop being reported. In addition to finding problems, testing is an opportunity to confirm beliefs about how users will use the new product and if it meets the needed requirements & expectations.

It does require some work & commitment to go through the test in different phases. But the rewards always outweigh the resource costs & time-to-market delay! Testing guarantees that the final product is of the highest quality, thoroughly validated & ready to use. 👌